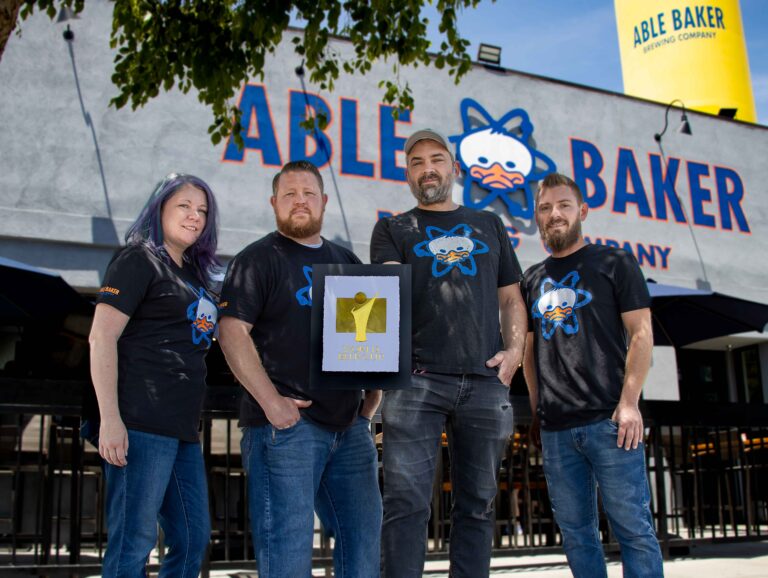 May 5, 2022- Able Baker Brewing Takes Gold with Monique, our Belgian-Style Quad, at the World Beer Cup in the category Belgian-Style Abbey Ale!

Head Brewer, Matt Marino commented “Personally to win a World Beer Cup Gold Medal for any beer is a huge honor, but to win for this particular beer is an overwhelming honor that solidifies the memory and absolute love that everyone had for Monique Lane, RIP. The beer never would have happened without Monique literally pressuring me for years to brew a Belgian Quad at 777. To carry this special beer forward from Triple Seven, to Joseph James, Scenic and Able Baker Collab and finally to give her a permanent home at Able Baker has been one of the most satisfying accomplishments of my brewing career. The medal was a cherry on top of an already legendary local beer.”

Often regarded as the “Beer Olympics” the 2022 WBC is the most prestigious beer competition in the world, and this was largest competition to date.

“The World Beer Cup showcases the incredible breadth and talent of the global brewing community,” said Chris Swersey, competition director, World Beer Cup. “Winning an award at this extremely competitive event symbolizes one of the greatest accomplishments in the art of brewing. Congratulations to this year’s winners on their outstanding achievements.”

Congrats to our outstanding team! Thanks for making us, and the Las Vegas craft beer scene, proud!